skip to main | skip to sidebar

CONTACT! AT LAST! ... or is it?
“The most important contact event in the history of this subject has just occurred.”
Dr. Steven Greer 2010

Some years ago CSETI (Center for the Study of Extraterrestrial Intelligence) published a photograph on their official website proclaiming to show an alien entity. The actual descriptions they used were “light being” and “loved one”. The photo was taken at night in woods during a CSETI ambassador to the universe training session.[1] It showed a bright object floating in the air amongst the trees. 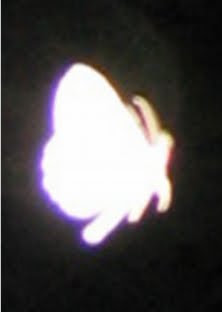 CSETI's extraterrestrial light being or, more accurately, protitame virginalis
To the average layman the object was easily identifiable as a moth. It was so clearly defined that its species could be identified. Its brightness was due to the flash from the camera. Despite being alerted to their seemingly embarrassing error CSETI officials and supporters remained adamant and insisted it wasn’t a moth but an alien entity. Shortly thereafter the photo quietly disappeared from their site following a torrent of ridicule.
Now CSETI has done it again. They have released to the public a photo allegedly snapped on November 17, 2009 of an extraterrestrial diplomatic ambassador.[2] 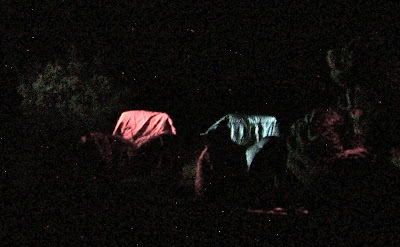 The photo was taken at night during a CSETI ambassador to the universe training session. The ET diplomat is seen hovering in the air by three empty chairs. According to Dr. Steven Greer the ambassador is wearing boots, vision augmenting goggles, a transdimensional energy projection system hat and is waving at the camera. To the average layman the object is easily identifiable as the branches of a Joshua tree. Indeed, the actual tree can be seen in the daylight photograph of the same location also presented by CSETI. However, when both photos are compared, the tree is not in the same position and the particular branch which perfectly matches the shape of the ambassador is high in the air, well away from and above the chairs. So how could a digital camera take a single photo and show fixed objects out of place? The answer is rather simple. The pertinent branch pasted by the ambassador for comparison but take into account slight variations due to different lighting conditions and camera position/angle in relation to tree.
As Greer says, the photo was taken with an exposure time of three-and-a-half seconds (exif data actually show 3.00 secs and the date conflicts though Greer gives a valid reason for the incorrect date stamp). 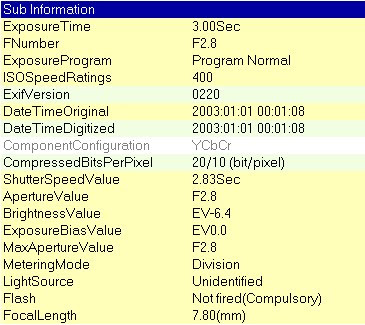 He also tells us no flash was used and that the camera was hand held. This is acceptable, too. He further claims that the light source came from an “orb” which temporarily lit up the scene and for a split second revealed the waving diplomat. This part, I conclude, is Greerian bunkum.
An aspect of the training session involves the use of electronic equipment to produce sound and light. “Landing strobes” are set up around camp. Confirmation of the use of such lights is found in Greer’s report of a previous CSETI session, “Jeff - moved the video camera to the adjacent field, and set out our portable landing strobe lights – indicating to the E.T.’s that we welcomed a landing, should this be safe and feasible for them. The rest of the team prepared for boarding and I sent signals with the high-powered light.”[3] In the ambassador incident the photographer, I propose, opened the shutter in total darkness while the camera was aimed towards the upper part of the near-by Joshua tree. The strobe flashed, then, in the follow-on darkness, the camera was moved to point towards the area where the chairs were situated and the strobe flashed again, all this in the space of three seconds. The result: a double exposure. Greer claims that a point of light in the upper left part of the full photograph is the planet Mars. If it were one would expect to see it as a line tracing the movement of the camera while the shutter was open rather than a defined orb. It’s possible something momentarily blocked the view of the planet while the camera moved from the tree to the chairs or maybe it simply isn’t Mars, just some artefact. After all, it would require incredibly steady hands to take such a stable image of a planet with a hand-held three second exposure.  For further clarity visit the CSETI site to see all the images relating to the event.
“The photograph proves what I’m about to discuss,” states Greer while speaking about the tree branch on the World Puja Network. He can hardly contain his excitement claiming that “this photo has gone straight to the CIA” and is “being sent to a number of world leaders.” Uncontested he continues, “this is the best photograph I have ever seen of an actual diplomatic contact event where an ET being has been photographed.” Nor can he resist adding more of his pseudo-science bunkum and states, “on top of his cranium is a disc-like white object that is a Transdimensional Energy Projection System that enables him to be teleported there transdimensionally.” Yet at the end of his rhetoric the photo has proven none of his statements. Added to the moth episode, however, it does offer proof that Greer and his CSETI organisation are disingenuous and preying on the gullibility of the less astute members of the UFO community. (The term “Occam’s Razor” could suitably be replaced with “Greer’s Moth”.) His declaration that “this is a new era…a whole new paradigm,” could be considered valid but not in the way Greer intends. Lastly, it is amusingly ironic that he suggests the diplomat is waving as the Yucca brevifolia is purportedly named the Joshua tree because Mormons thought its shape resembled the prophet Joshua waving them on to the Promised Land.[4]
Dr Greer and his team will be in the UK in the summer of 2010 providing more ambassador to the universe training. The attendance fee is a paltry $3680. The British fauna and flora should provide some interesting results. Anyone wishing to sign up to this or future events can do so at CSETI.org.
Notes and Sources
1. A typical training session involves a group of paying trainees sitting out in the open and observing the sky while CSETI staff manipulate sound and light devices. According to some attendees prosaic objects and sounds such as satellites and hooting owls are claimed to be of extraterrestrial origin.
2. CSETI's ET Ambassador encounter report.
3. CSETI ET encounter report from 1993.
4. http://www.desertusa.com/jtree/josh_month.html Other places you may wish to visit